Jordaine and I go “way back” so it was only logical that I’d give her the attention she deserves! Visit my Facebook page to find out more about Jordaine and see photos from her first fundraising event.

Jordaine Chattaway has veered down several forks in the road to find her path, but as she begins to realise a childhood dream of to touch the lives of those less fortunate, she knows she’s finally taken the right turn.

Jordaine Chattaway shares her story during a Touch of Global Goodness Fundraiser.

The Mrs International Australia nominee for South Australia has created the Touch of Global Goodness Campaign and is working tirelessly to raise funds for orphanages worldwide.
The 26-year-old hailing from the River Murray town of Mannum had, from a young age, told her mother she was going to “save the world” and “save the dancing bears”, but chose to take a more traditional career path in journalism.
“All my life I’ve felt a longing to help people,” Jordaine said.
“I’ve had several career paths, but I’ve never really felt like I was doing what God ultimately planned for me and so I took a few risks.
“I walked away from two promising career paths and trusted that the right thing to do was follow my heart and by doing that I would ultimately find my place.”
It was while following an acting dream that Jordaine realised her leap of faith away from a mainstream career that was a stepping stone to her true path, the path she had always talked about, helping others.
A casting call for the Touch of Goodness Foundation (TOGF), an Australian organisation that forms part of an international circuit of fundraising pageants that feature nominees who work to raise money for their chosen cause, revealed the vehicle for Jordaine to move forward.
“When I saw an audition call for an ambassador for the Touch of Goodness Foundation… I knew it was what I wanted and so I applied straight away,” she said.
“It would give me the opportunity to work for and represent an Australian foundation which does so many amazing things across the country and possibly give me the opportunity to work on projects around the globe.”
Jordaine is one of four national finalists for the Mrs International program and will be judged on an interview of her work and goals, athletic wear and formal wear in a Miss Australia style pageant for the chance to spread her work even further and compete for the Mrs International World title in Chicago in July.
In her efforts to “save the world”, Jordaine has created the Touch of Global Goodness Foundation, a program that she hopes will allow people to donate money to orphanages overseas and see where their money is going. 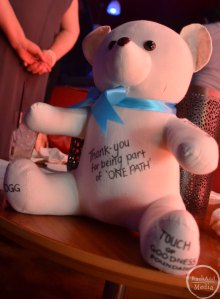 Presently, she in talks with contacts in Manila, Africa, China and Indonesia to support local orphanages, but she hopes to expand her reach much further.
“In Australia, it is easy to send toys or blankets thinking that’s the nicest way to show we love and care for these children, but the orphanage might need new schoolbooks or simple necessities such as nappies,” she said.
“Our number one priority is ensuring we have a contact who works in the orphanage who can tell us what it needs, not what we want to give them or think they need.”
Regardless of the outcome of her Mrs International debut, Jordaine knows she’s now on a path that is one she can walk down for life.
With a background in writing and project management she is aiming to delve into the not-for-profit world where she plans to “spend my days – as well as my nights – doing what I love and I am passionate about and really, truly make a difference”.